Netherworld Haunted House has been a fixture in Georgia for 20 years of high-tech, high adrenaline scares. From the dreadful knight that greets you at the entrance to the pants-wetting finale this is a haunted house that brings consistent and non-stop entertainment! With two houses full of details, ghouls, and living scenery there is a lot to see here. We also suggest you pay close attention to the horror museum if you don’t buy the speed pass, visit the well-stocked gift shop, and enjoy the haunted fair atmosphere in the parking lot. They are constantly changing and evolving, reworking their scenes every year so that they can promise their customers the best scares, the most high tech monstrosities, and the most devoted and trained actors. For six years this review team has had Netherworld on their list of places to visit, but we were daunted by the four hour drive there and back. Our only regret is that we waited so long, so make sure that you make the trek to this Mecca of horror!

The cast at Netherworld are a well-trained group of ghouls all perfectly practiced in catching their passing victims and sending them on screaming, deeper into the attraction. With 144 monsters roaming the halls of both haunts there are no empty rooms or shortage of shocks. Multiple times our group found it hard to tell the difference between animatronics and actors until they were lunging at us. The setup of the haunt doesn’t allow for much in the way of interactive dialogue, but our review team did get some mighty witty responses from a wily witch, Count Orlok, and a piteous old man locked into a room with several less than pleasant creatures. It’s not hard to see how much work is put in by all of these monsters to make sure they offer the maximum amount of scares.

Our team was pretty blown away by the costumes and makeup at Netherworld. The work here is movie quality without a doubt, and was one half of the equation for so many actors blending so perfectly into the scenery until they gave themselves away to attack. The list of impressive monsters was incredibly long, but we were especially blown away by a statuesque angel, the knight that waved us into the first haunt, and the ethereally beautiful but monstrous mermaid so perfect that suspension of disbelief was barely needed. When masks were used they were all tucked and well-fitting, when makeup was used it was seamless and realistic, and costumes were all detailed and appropriate. The work they’ve done in this category is simply outstanding.

The staff at Netherworld was slammed with customers, but all our interactions with them were pleasant and helpful. From the costumed monsters to the easily spotted staff members everyone was ready and able to answer any of our questions. Some of the floors are a bit unstable or surprising, but we suggest if you’re feeling unsteady you see if the rails provided will give you a hand. Line interaction is tremendous at Netherworld and monsters haunt every section of the attraction from the fair-like atmosphere outside to the wait inside. We highly suggest that if you’re impatient you buy the fast pass, but there’s no shortage of things to see and enjoy during the wait if you buy regular passes. The gift shop has an incredible selection, there’s food and photo ops outside, and a museum offered to those that choose the regular line.

The atmosphere at Netherworld is like a giant haunted fair. The parking lot is full of monsters and revelers, screams ring through the air over the music, and lights and animatronics abound. We were amazed at the amount of things to look at. With the projections and signs it’s easy to find Netherworld and there’s no question from the moment you spot it that it’s a haunted house. Stop by the booth of Robert Thaddeus Zombie and give him a kiss, you won’t forget the experience. Make sure that you bring a roll of quarters to try the Scare Blaster machine, and if you’re hungry stop by the funnel cake truck! We were especially pleased at how clear all the directions to the ticket windows and gift shop were, and the multiple choices for photo ops.

Netherworld is a mixture between walking through a terror filled Wonderland and visiting a big budget movie set. The special effects here are tight and on point. From walls shifting to swallow you up to the floors bulging and moving underneath you there’s a huge variety of tricks and treats built into both haunts. There is some bleed of sound here, but considering the size of both haunts this seemed inevitable. We were amazed to find that many of the screams built into the scenes were nearly indistinguishable from the screams being released by other patrons near us. Scenes are richly detailed in each area and there are creepy crawly nightmares and surprises from the floor to the ceiling so make sure you look both up and down. Again, Netherworld provided us with some of the most unique set designs of any haunt we’ve visited this season, from Cthulhu based monstrosities to bloody nymphs we were delighted to see so many faces of horror in one place. This is a haunt that pays close attention to sights, textures, smells, and layers to provide the richest and most intense of terrors.

The two houses in Netherworld have two different themes. ‘Monsters’ is a collection of ghouls and ghosts, mythological beasts, and other surprising specters that creep through the halls and hide in the dark. There’s a huge variety of creatures here, but transitions between things like Cthulhu and the deep ocean are surprisingly smooth and ingeniously done. Constantly changing focus only helped to add awe to terror as we breathlessly awaited what would come next. The second house, ‘Vault 13 Meltdown’, is a more science-fiction focused haunt with a huge assortment of aliens, robots, and mutations waiting to add unwary humans to their blood-splattered walls. We found ourselves dodging a giant animatronic robot, fleeing wasp monsters, and counting down our doom as nuclear blasts went off all around us. Grinding saw blades, moving floors, and a toxic foam room make sure that you feel enveloped in the story and world that has been created here.

Netherworld has a little bit of everything to scare its eager guests. Our team found themselves dodging terrified patrons from both the front and the back as they were sent screaming in every direction by the monsters and mayhem. Actors use both jump scares and creeping silence to ratchet up the terror while animatronics clash and wail around you. Most of the mechanized scares are set on laser triggers, and while we did notice that some would go off for the front of group and not reset for the back there are so many effects set into the haunts that the back of the group had their own surprises. Actors were good about balancing themselves between front and back which was incredibly impressive considering the groups eventually begin to meld together and no one was ever left alone for long. The finale is a bit more fun than frightening, but like the rest of Netherworld it is wholly unique and not to be missed!

It took us about forty-five minutes to walk through both haunts. Regular passes can be bought for only ‘Monsters’ or as a combo for both houses and the fast pass gets you to the front of the line for both houses. A single ticket on weeknights and Sundays is $23 and a combo is $28, while on Friday or Saturday you pay $25 for just ‘Monsters’ and $28 for both. The VIP fast pass is $55 on any night and well worth the price. Netherworld is a huge haunt that attracts a lot of guests, and unless you plan to show up early you’ll find yourself needing to park in a paid lot nearby and waiting in line for some time. Free parking is available on site until it fills up. With an average walkthrough just a bit below an hour and a ton of things to see and do throughout the haunts and on the grounds Netherworld is well worth the money! 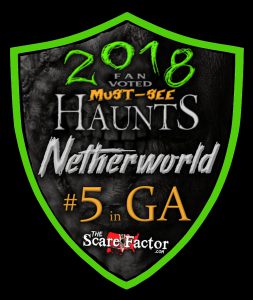 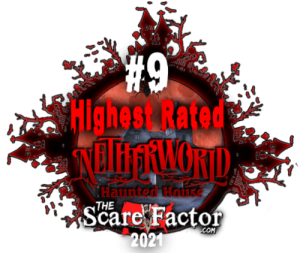