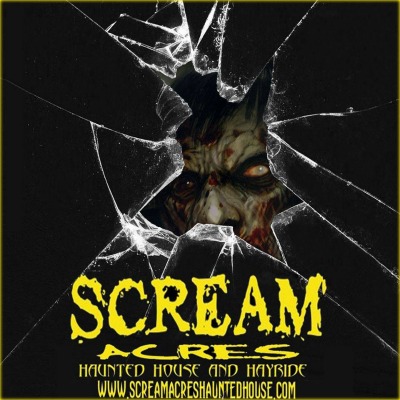 This haunt has been around for over 13 years and they are back again this year with their haunted house and hayride through the backwoods, Carolina swamps. It’s an experience you won’t want to miss. With some traditional Scream Acres scares and some new additions, this looks like it will be a good year for this charity Haunt.

Scream Acres is essentially two attractions ‘ a haunted house and a haunted hayride. Because of this, there is some disparity between the two ‘ the house tends to be more intimate, subdued, and creepy whereas the hayride tends to be in your face with sound and light. The hayride cast were arguably better than those in the house.
In the house most of the actors were very quiet and didn’t always interact with the visitors coming through, though they were suitably creepy, staying in character whether interacting or not. They did seem to clump together in small knots, leaving some sections of the house sparse. On the hayride, the actors were energetic ‘ cavorting, screaming, and were menacing toward the victims on the wagon.

Scream Acres is largely staffed by volunteers and as such there is less detail paid to makeup and costuming than at a pro-haunt. Lots of blood splattered jeans and t-shirts, lots of masks. There were some notable makeup effects that were very well done, and others that were hastily prepared. Lots of clowns, mostly in masks, were in at least two different scenes along the hayride. The Southern heat is not kind to actors in masks, but the Scream Acres crew did a good job with those they had.

Geared towards providing an entertaining experience for the whole family, the care that the Scream Acres staff have towards that goal really shows. While there is a walking portion of the hayride through a section of dimly lit wilderness that could cause a stumble, overall the haunt is geared towards providing a fun and immersive experience. The parking lot is well-lit, there are signs directing visitors, and there are plenty of staff in easily identifiable t-shirts willing to answer questions and provide help. They have a professional standard that they adhere to and are willing to provide whatever assistance they can.

This haunt truly delivers on providing the feel and atmosphere of a haunted house. When you arrive on site and purchase your tickets, you are surrounded by horror movie soundtracks punctuated in the background by screams, bangs, and roars from the house behind you. The grounds are lit well enough to see, but are dark enough and overhung by ubiquitous Southern trees to make you feel isolated and vulnerable. The interior of the house uses a variety of tricks from lighting to scents to get you in the mood for a scare.

A variety of effects are used across the attraction usually to good effect. The only criticism we had was that some things get to be a bit repetitive. Chainsaws are everywhere; in some cases less truly is more. There were a lot of small details scattered through things. Keep your eyes open as you go through the house or when you’re pulling up to a scene on the hayride. You might find something surprising or be entranced by the attention to detail included in this haunt.

There is not truly an overarching theme to Scream Acres. It is an old school, traditional haunt with some standard scares inspired by a variety of sources.

There are few distractions employed at Scream Acres. Instead, there are lots of in-your-face actors, roaring chainsaws, darkness, and sounds that come at you from everywhere. Actors did a good job of spreading the scares around to the whole group and working up and down the trailers on the hayride.

It takes about an hour to get through Scream Acres, though when we arrived the crowds had not yet arrived and thus we were able to move through lines as if we had purchased a Fast Pass. The house itself takes perhaps 15-20 minutes to walk through and the hayride and swamp walk lasts for approximately 30-45 minutes. A general ticket is only $15. Four minutes of scare per dollar is a great value. While the House at Scream Acres could use a few more improvements, the site overall is well done and worth both the cost and the drive.
It should be noted that this haunt features walking both through the house and at one point during the hayride. Coupled with climbing onto the trailer, this haunt is not accessible for those in a wheelchair. 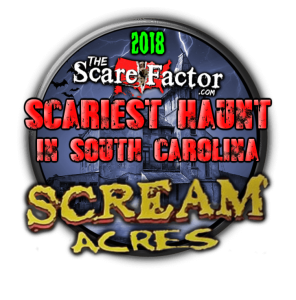 Most Intimidating Chainsaw Attacker - The Butcher (Given by: Team Jefferson Starship)