Birthed into this world by the creepy creators of Scarevania, Son of Scarevania is rearing its head back and producing its first screams for the 2016 Halloween haunting season! If you’ve been to Scarevania before, you will have somewhat of an idea of what you’re getting into. If you haven’t, you may be in for a stun! It’s very hard to predict what these twisted minds will throw at you! Taking place in the large Cornerstone Center for the Arts building, one may wonder what kind of haunted house is being put on in there. Well, we can tell you this: the haunt was given permission by the building staff to go all-out with the haunt, such as painting the ceilings, walls, floors and all! The attraction also takes place on the third floor, which was once used as a Masonic Temple (it’s said that this floor is truly haunted)! Was that an actor’s hand that just brushed your shoulder? No… because the actors and actresses here can’t touch you, but they can’t guarantee that the supernatural won’t! This is the haunt’s first season, so everything isn’t completely finished just yet, but we were pretty surprised by what they were able to tackle in such a small amount of time. If you’re near Muncie, Indiana during the Halloween season, swing through Son of Scarevania (and Scarevania “senior,” of course) if you have time; combo tickets for the two can be purchased for only $20.00!

We were very surprised to say the least when Son of Scarevania’s management informed us that a lot of their acting staff are new to haunting! However, some of them are theater students, which gives them a bit of an edge with their seasoned acting skills. A few of them have also been recruited from Scarevania, so needless to say, they’ve gathered a few skills from there as well. We certainly weren’t expecting the first psychotic patient to collapse on the floor so hard that her slipper went flying across the floor! Now that’s true DEAD-ication! Several (but not all) of the actors proved they’ve got some good lungs, but their masks muffled some of their voices enough that we couldn’t understand their outbursts. Among the 25-30 cast members, the speedy rabbit that we “jumped” several times and the girl who frantically scratched the walls as she argued with the TV (or someone else that we couldn’t see) gave us some of the most energetic and believable performances! Sister Mary also didn’t seem to be very happy about our impure-ness being in her scene and something about the food on the dinner table just didn’t seem right (…we think it wasn’t cooked well enough). All in all, as long-time visitors to Scarevania “senior,” we could definitely see some major similarities between the casts of these two haunts, so be prepared for anything as they gain more experience!

Owning your own professional mask company definitely has its advantages and such is the case with one of the owners of this attraction! We’d venture to guess that around half of the actors wore masks and each of them are exclusively made with Pumpkin Pulp Productions’ grungy and menacing signature look (the masks… not the actors). We didn’t notice much in the way of prosthetics, but several of SoS’s characters were sporting some really nice makeup work… especially Bastinda (the witch we found in the queue area) and Sister Mary. While the makeup we found on other characters tended to be a bit more basic from what we could see, each of the characters matched the looks for their roles quite adequately. The only thing that really stuck out to us as odd was the actor wearing a crocodile mask and basically plain clothes as he scurried across the floor on all fours, but the dapperly-dressed hare picked up the slack for the clothed creatures of SoS.

Son of Scarevania is located in Muncie’s Cornerstone Center for the Arts building, which is an old, multi-story structure that, despite its size, blends in with its surroundings pretty well for anyone that hasn’t been here before or doesn’t know what to look for. Our GPS took us to the correct building, but Scarevania’s immaculately-decorated hearse being parked by the road is what let us know we had arrived. A few small, red lights in the upper-floor windows and a sign above the entrance to Cornerstone confirmed that Son of Scarevania could be found in that building as well. Staff members were located in several places throughout the building to guide us up the correct set of steps and elevator to get to the floor where the scaring takes place. The building’s restrooms were open during our visit (and a welcomed sight after spending several hours on the road). After finding the ticket table, we were directed down a long hallway into a large queue area/ballroom where a DJ, a party-light show, a Son of Scarevania picture show and a witch entertained us during our wait. The witch (Bastinda) was doing a great job and even managed to run off some children that were waiting in front of us (or they may have gotten eaten, we aren’t quite sure… but, we never saw them again)! All of the staff members that we encountered were very friendly, helpful and willing to go out of their way to answer any questions that we had.

Since this building is an active arts center, there isn’t much the haunt can do to the exterior and entrance parts to the attraction.The hearse, lights in the windows and sign above the entrance still served well to confirm that we were at the correct place. Once we started getting closer to the ticket booth (inside the building, on the 3rd floor), things started getting spookier. Although this building is pretty darn old and eerie-looking itself at night time, we were led down a hallway with vintage-looking, flickering lights that helped set the mood for a haunted house after we picked up our tickets. Hard rock music was loudly playing in the queue area and a throne with a wispy broom propped up against it left us wondering who (or what) it was for. This was ironically followed by one of the loudest, most realistic witches we’ve ever heard… effectively drowning out the ballroom’s DJ and filling the space with a spine-chilling cackle… and answering our question.

The masterminds behind both this attraction and its parent haunt take pride in creating and building many of the effects that you will experience. This means that you’re very likely to see things you haven’t seen before and, when it comes to the artistically-talented Brian Blair and his inventive team, you just never know what you may run into. The upper level was mostly quiet other than the creepy echoes of bawling cast members, but the walls and scenery of the asylum-themed hallway were worked over with exceptionally-applied grunge, mold and just plain nasty details. We did find that appropriate sound effects were heard throughout most of the lower section, however, and a good chunk of the scenes down there are of the blacklight-lit, 3D variety. A behemoth, bloody-mouthed bear, a giant jack-in-the-box, a cow head, an electrifying chair, authentic medical equipment, a unique “winter wonderland,” a well-dressed dinner table and a disorienting strobe are just some of the things that we encountered within the madness of SoS.

It should be noted that, as 2016 is Son of Scarevania’s first year in operation, many of the rooms were still unfinished at the time of our visit. Some of them run next to the building’s exterior windows (they weren’t covered, so we could see outside) and some of the prop placements and scene transitions were a bit choppy. However, we can attest that this haunt’s creators have always got a trick or two up their sleeves and, drawing on our previous visits to Scarevania “senior” and judging by the level of detail on the upper floor, we don’t expect things to stay the way they were for very long! There may even be some more additions by the end of the 2016 season and we’re confident that, in 2017, Son of Scarevania will likely be an entirely-different animal!

The masterminds behind both this attraction and its parent haunt take pride in creating and building many of the effects that you will experience. This means that you’re very likely to see things you haven’t seen before and, when it comes to the artistically-talented Brian Blair and his inventive team, you just never know what you may run into. The upper level was mostly quiet other than the creepy echoes of bawling cast members, but the walls and scenery of the asylum-themed hallway were worked over with exceptionally-applied grunge, mold and just plain nasty details. We did find that appropriate sound effects were heard throughout most of the lower section, however, and a good chunk of the scenes down there are of the blacklight-lit, 3D variety. A behemoth, bloody-mouthed bear, a giant jack-in-the-box, a cow head, an electrifying chair, authentic medical equipment, a unique “winter wonderland,” a well-dressed dinner table and a disorienting strobe are just some of the things that we encountered within the madness of SoS.

Do clowns, psychos, a bad Santa, witches, rabbits, or good hiding spots scare you? If so, this is the place to be! But, rest assured that’s not all they have… We were scolded by a very unhappy nun, repeatedly rejoiced with by a rabid rabbit, threatened with different weapons and a few even sneakily stalked us. It did, however, seem that they targeted the female in the front of our (2-person) group, most of the time. The many doors on the third floor provided some of the best hiding spots for the monsters and, of course, they definitely used them to their own advantage (those sneaky suckers)! Fright levels ranged everywhere from terrifying startles to intimidating appearances during our visit, so we wouldn’t consider this quite an “extreme” haunt, but we still got enough of a blood pressure rise to advise against bringing youngsters that aren’t “seasoned” enough to handle some good scares (the kids that ran off in the queue area were a pretty good indication of this).

General admission tickets to explore what awaits you on the spooky third floor of this building can be purchased for $12.00 per person. Our overall tour time was on the shorter side at about 8 minutes, putting this attraction at 0.67 minutes of entertainment received per dollar spent (for reference, the average from all of the haunts we were able to visit last season was 1.5). Son of Scarevania is only about 5 minutes from Scarevania “senior” and combo tickets to each can be purchased for only $20.00, so keep this in mind if you have time to visit both of them this season. These combo tickets CAN be used on different nights if you can’t squeeze them into the same evening. We had a great time at Son of Scarevania and would definitely recommend a visit if you’re in the area! 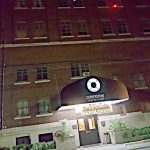