The Cabin at Twisted Room Escapes

The Cabin at Twisted Room Escapes is a Escape Room located in , . 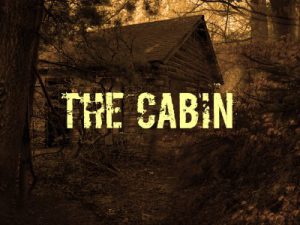 Well imagine that… Team Zombillies is lost again! This time, we found ourselves and two others in the middle of the woods with next to no resources at our disposal. With no cell service, no map and no compass, we began to wonder if we’d ever find our way out.

But wait… there was something in the distance. Something big. Is that a cabin? Maybe we can call for help! As we slowly walked closer, it became apparent that it was – indeed – a cabin (with no lights on, of course). With little food or water left to survive, we decided to see if anyone was home.

Naturally, the front door was locked. We didn’t see anyone else in sight, so we broke in to look for supplies. What we found was much more than that, and it quickly became clear that something very evil had been going on here.

A gunshot shatters the silence of the forest. The cabin’s owner, no doubt… probably irked that we’d discovered his wretched secrets. Time was running out. At this point, we were down to one option left for survival: escape!

This was our first visit to Twisted Room Escapes (TRE)… and it very well could’ve been our last. Did TZ live to write another review!? (We’ll pretend you haven’t figured that out yet.) TRE’s ‘The Cabin’ room was a blast for our Team’ in more ways than one.

Nestled in a large section of a strip mall, a large, neon-blue ‘Escape Room’ sign lured us in from the main road. Admittedly, we were surprised to not find a large ‘Twisted Room Escapes’ sign instead. But, when we approached the front door, the flyers on the windows assured us that we were at the right place.

Friendly staff greeted us immediately after we walked in. The staff here were among the most friendly we’ve encountered at an escape room! They made sure we understood the full concept of the room before we were left to fend for ourselves (which was greatly appreciated).

TRE’s lobby is very crisp and clean. A variety of puzzles and games laid idle next to some padded benches and chairs for those waiting their turn to begin. Except for our conversations with the staff, the lobby was very quiet. Despite that, we still couldn’t hear anything coming from inside any of the rooms.

We did get a chance to see a previous group emerge from their potential entrapment to spin TRE’s ‘Prize Wheel’ and win some nice trinkets. (Some of these include branded pens, can koozies, sticky notes and, if you’re lucky, a ‘hug’). We’ll fill you in on how to acquire said trinkets in a minute…

As soon as we stepped foot in this room, it was very obvious that we were standing in front of ‘The Cabin’ in question. As the story goes, our group was worn out and lost on our hiking trip. Forced to scavenge for helpful items, we were warned that the owner of the cabin would be back in an hour (made evident by the occasional sound of a gunshot). Our task was to find what we needed to get out of the woods before ending up on the receiving end of that gun blast.

The theme for this room was easy to find on their website. It was explained to us again – in slightly more detail – before our time began. Almost everything that we found seemed to make sense with this theme. Some items exposed the true, hidden evils of the room thus creating more urgency to get out. Others, proved to add an extra layer of ‘WTF’ to the experience, but didn’t seem to be connected to the story or any other clue logic’ at least directly. Every time we heard gunshots (which were quite startling), a rush of panic swept over our group, reassuring us that the clock slows down for no one.

A big nod of appreciation goes out to the efforts made to replicate a cabin in the woods (no movie references here). An entire rustic log facade has been crafted – complete with a squirrel feeder – and takes up an entire wall of the room. The other three [walls] have been painstakingly painted to mimic a misty backwoods valley. Of course, no ‘cabin’ room would be complete without a matching outhouse.

Most of the props and puzzles include items that you’d expect to find in such a location. Some of our favorite props include the antlered animal, a particular communication device and, of course (being the horror fans that we are), the bloody saw-club weapon that we discovered.

Some of the creativity in this game really put our brains to the test. Almost everything in this room was utilized in one way or another. There are many things in this room that may not be what they appear, so you may need to think outside the box every now and then to continue finding hints. Though, there are a few decoys that can distract you if you aren’t careful.

The game’s success rate is displayed right on their website and, at the time of our visit, it was at 30%. However, this room does allow unlimited hints. If it weren’t for that (we used at least 4), we know we wouldn’t have escaped with 6 minutes to spare like we did; that is, if we would have escaped at all.

This room is a little less ‘linear’ than others that we’ve played. We’ll tell you that you want to keep track of EVERYTHING that you find here. Also, be sure to pay attention to the small details. If you’ve never done a room before, this one may be difficult for your group. As warned on their website, it will also be difficult for less than 4 people. In these cases, the staff may need to assist you through the room.

Our host only interacted with our group when requested. But when he did, his hints were helpful and helped us advance from the rut we were stuck in.

Along the way, be on the lookout for a few ‘Easter eggs.’ The number of these that you find will determine how many spins you get on the ‘prize wheel’ (mentioned above, in Atmosphere/Customer Service).

This 60-minute game is priced at $28.00 per person. We haven’t had the chance to attempt any of their other rooms yet. But, if they are anything like this one, we wouldn’t hesitate to book them. The room was set up very well, clues matched the advertised difficulty and the whole experience felt very welcoming. The room itself created just enough sense of panic to make us work harder at escaping. When the door to freedom finally opened, you couldn’t rip the grins off of our faces’ even with that saw-club thing. Compared to the other rooms we’ve done in Indianapolis, this room was our favorite so far. The cabin felt very realistic to us and, once our time began, we were enveloped by the room’s story. Some escape games feel as if you are just trying to find puzzles and a way out. This one exposed some evil truth as well as the creativity of those behind the room.