The Diner at Quicksand Escape Games

The Diner at Quicksand Escape Games is a Escape Room located in , .

Team Yes and Escape reviewed this Escape Room on August 19, 2019.

What’s this? Dinner and an escape room? Yes, please! Oh…the name of the escape room is “The Diner” because it’s modeled after a 1950’s diner? Well, that still sounds like a lot of fun, and Team Yes and Escape really wants to play. And so we went to try one of the four rooms offered by Quicksand Escape Games in the Pacific Beach neighborhood of San Diego.

If you and your crew think you have what it takes to bust into a diner after closing time, to follow the trail of clues left by the “inside man” who works there during the day so you can make the ultimate score, then this game is for you. Our team members have improvised being incompetent thieves on stage before, so we felt we were the perfect band crew to take the challenge.

We had the opportunity to speak with one of the employees before the game started, and they let us know that they felt this particular room, of their four, was their most popular room, but was not the most difficult.

Quicksand Escape Games is located on the second floor of their building, but there are plenty of signs on the sidewalk and the stairs/hallway to lead you to the lobby. There’s no dedicated parking lot, but street parking…can…be plentiful during the right time of day. You can also opt for the paid lot on Cass Street, just around the corner at a cost of $7 for three hours. Just make sure to get there early enough to find parking, as they ask you to arrive fifteen minutes ahead of your booking time.

The main lobby was slightly dark and foreboding, in a good way, almost inviting you into the depths of the mind of the game master. The receptionist was very kind and had us sign in and offered locker space for all our belongings for which we held the key until the end of the experience. We were also briefed on how to operate a very unique style of lock used in the room, which was helpful as nobody on our team had encountered one before, so we appreciated the thoughtfulness.

Next came the video explaining the rules and safety protocols for the game, but was not themed to the room. The video itself was very well made and clear to follow, but its tone and friendly music felt more like a commercial, which was slightly jarring given the mysterious veil draped over the room with dark color tones and minimal lighting. Afterward we were escorted to the game room.

We received the basic briefing for the room once we had already entered, via the receptionist. She told us that we were attempting to rob the diner, following clues left by a member of our gang while the joint was still open. The cops had been alerted and would arrive in an hour. We asked: “What are the victory conditions?” That information was withheld, initially creating a break in the immersion, as we assumed that since we were a band of skilled thieves, we would know exactly what the target was. However, as the game progressed that information did present itself and actually built to a really exhilarating moment in the home stretch, which we all thoroughly enjoyed. There was just an odd gap that delayed the building momentum between the rules video and actually starting the game.

The set was impeccably dressed. We all almost were too taken in by the decorations to listen to the briefing. Everything looked like it came right out of the 50s, and every puzzle followed suit. Be it themed to the era, a diner, or both at the same time, it really felt as though we went back in time. Some of us even started using 50s diner slang while talking to one another.

There was a modern TV in the room that served as our time keeper and hint delivery system, which detracted from the immersion somewhat. Although we managed to escape without asking for a hint, the game master did offer a few nudges. When this happened, there were no audio indicators, so unless one of us was looking right at the screen, we would not see the message. This was problematic because it is possible to have the entire team in a position where the screen is completely out of eyeshot, so when your team tries this room, make sure to keep your eyes peeled. Also, with one exception, there was no audio in the room at all, not even from an ambiance perspective. Even though this made some sense as the diner was “closed,” it also hurt the immersion aspect as we could hear the modern sounds of the rest of the building during our game.

The gameplay featured some really unique objects and actions that were required to escape. Some of the puzzles had pieces we had never seen before, which was very much appreciated. As a team, we felt compelled to explore every inch of the room, and that the nature of the clue streams encouraged high levels of teamwork and communication. Whereas these two skills are usually just “recommendations” for success, they are extremely vital in “The Diner” and served as a pleasant feature for a group of friends who wanted to have fun together. All five of us were able to contribute in meaningful ways, and left us with a sense of collaborative accomplishment. Team Yes and Escape escaped with about four minutes remaining, so the pacing felt very on point.

The puzzles themselves were pretty logical to follow once you found the items/information you needed. There is enough for people to do if you split your team into smaller groups. There are two exceptions that were low points for us. One puzzle requires you to obtain a measurement, and the device you’re provided to do so can easily give you different numbers over time. Three of us tried measuring at various points throughout the game and got three different readings. It was the third try that was the charm, but without giving too much away, this device doesn’t leave a lot of room for user error, so it took awhile to figure out what reading was correct.

Secondly, there was one item that was a super clever delivery system for a clue and we all really liked. However, its location in the room was extremely confusing as it was near an object that’s marked as not being a part of the game. We all saw that warning and ignored the item until we were nudged by the game master. Once you realize you do need to interact with the item, it takes some time to manipulate it to the point where the relevant information can be gathered. If a team was running close on time, this could really make or break victory.

The noted areas aside, working together to solve the clues and discovering the final climactic clue stream was thoroughly enjoyable and we do recommend making a reservation for “The Diner.”

For a 60-minute escape game, you will pay $32 per person, or $75 for a party of two, but your booking will be private, regardless of size. The website doesn’t offer a difficulty rating, but does claim this room to the most popular. They also state, though the room can hold eight players, that experienced groups should max out at six players for the most enjoyment, which we felt was very accurate. When we were done, we received a coupon code for a future booking, and the receptionist was kind enough to explain the themes of the other three rooms available. “The Diner” at Quicksand Escape Games is fun for escape room enthusiasts and fans of the 50s alike. 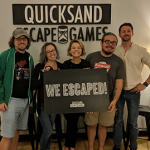