The Haunting at Shireman Homestead

The Haunting at Shireman Homestead is a Haunted Attraction located in Columbus, IN. 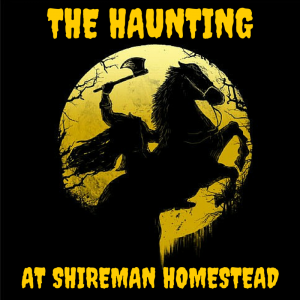 This was our first time ever visiting The Haunting at Shireman Homestead and what a cool place this was! This haunted trail takes place on a huge, not-for-profit farm that raises money for saving animals, rehoming them, taking them to assisted living homes and more! What they do on the farm during October is for a very good cause, but it isn’t all that they do. They also hold different events in the spring and winter too, not haunted ones, but unique-sounding to say the least. We really didn’t know what to expect at the farm upon arrival but the overall atmosphere was darker and really helped set the mood for a haunted attraction. Along their spooky trail you will come face-to-face with their own version of a headless horseman, venture through a ghost town, trudge across several bridges, ride in an elevator to their mine shaft and you may even come to a ‘fork in the trail’ which requires that your group make a decision. Do you follow the dark tunnel to the left or the dark wooded path to the right? The decision is yours…Did we make the right one? Continue reading to find out!

We must note that before we visited the trail, the owner informed us that some of their normal scaring crew wouldn’t be there on the night of our visit due to personal reasons. They did however, explain that they had covered their spots with volunteers that don’t normally work at the haunt. The horse-riding crew members did seem to be very familiar with the trail, how to ride the horses and how close they could get to people walking along the trail so we are assuming they are long-time members. But out of the others we couldn’t really tell which ones were veterans of the trail and which ones weren’t. A staff member told us there were about 30 characters in the woods so for this length of trail, our encounters with them were few and far between. Dialogue was very brief most of the time and, generally speaking, encounters were limited to the actors jumping out from their hiding spots with a brief stare-down before returning to their tree, nook, cranny, or what have you. However as with every rule there are exceptions, our most exciting interactions of the night were those with the Bone Collector, the man in the old ghost town, the Native American with her deathly stare, the masked chainsaw attacker and the actors in the mine.

Quite a variety of costuming was noticed at Shireman. However, many of them consisted of outfits, masks and street clothes that can be easily found at your local stores. That’s not the case with all of the creatures though. The headless horseman, mine welcomer, fellow in the ghost town and indian had more unique costumes that stood out to our group and really matched the scenes we found them in. There were other costumes that didn’t really make sense with where we found them, such as what appeared to be a nurse in a tree. There were also some costumes that blended in well with their surroundings such as the werewolf that one of our group members nearly trampled because he didn’t see him! You may also see some familiar masks along your journey including Michael Myers and Leatherface, but we aren’t certain that they are there every night.

A dimly-lit sign off the highway helped point us in the right direction of Shireman. An additional haunt sign, several parking signs and Halloween lighting greeted us when we pulled in, letting us know we had found what we were looking for! An air balloon marked the entrance of where tickets can be purchased. This was kind of a central area of the attraction that included a concession stand, bonfire and is also where the wagons will drop you off after your tour, that is if you make it. Everyone is invited to have their picture taken for free with Shireman’s hearse, which is conveniently located between the queue line and the starting point of the trail (you provide the camera and/or phone). Everywhere we walked at this attraction was lined with gravel, making it easy to navigate although we did still run into some tree roots on the trail so just watch your footing out there. There were also lights and caution tape lining basically the entire path, making it nearly impossible to stray away from where we were supposed to be. Friendly staff were located at the ticket booth, concessions, the entrance of the trail, at the mine shaft and on the wagon in case any questions or concerns are to arise. T-shirts can be purchased on-site and we highly recommend their coney dogs! If you do happen to purchase food, the proceeds from it go to the Salvation Army.

It is obvious that someone here likes Halloween! Shireman Homestead kind of resembles a small little Halloween town with all of their inflatables, ghost projection, orange and purple lights, pumpkins, creepy music and, of course, a hearse! All of the barns and equipment make it obvious that it is a farm, but everything is kept dimly lit to bring out an overall spookily-fun atmosphere. A spooky ghoul on a horse greeted us in the parking lot by shooting flames into the air and menacingly laughed as her horse galloped off! (come to find out, that was the owner!)

The effects that we stumbled upon while navigating the trail consisted of things that had been purchased, built by the haunt, or possibly extra items from their farm. Common farm items that were used included water tanks, feed sacks, pallets, corn stalks and convoluted piping. The water tanks made for a pretty neat effect after flashing lights were submerged into them. The trail at Shireman isn’t just used for the haunt and some of it is taken down and put up each year to better accommodate their other attractions that take place on the trail. Despite this, small shacks and a ghost town appeared to have been constructed by Shireman and added an extra touch of realism to their trail as well as a Jeep, clown vehicle and multiple bridges. Most of our journey consisted of little to no sounds at all, but when they were heard they matched their respective scenes. A growling sound that we heard outside the mine was so realistic sounding that it had us watching in all directions! Various lighting was used throughout the trail from strobes, multi-colors and string lights to intentional areas with no lighting at all. Other effects that we came across on the trail were real horses, flames, decor hanging in the trees, a teepee frame, a well, sirens and an elevator that plummeted us into the mineshaft.

Shireman has their own ‘Headless Horseman’ who will stalkingly guard and protect the woods that this trail winds through. Although there is a story revolving around the one with no head, the trail didn’t really seem to flow from scene to scene. Instead, things appeared to be random in nature and no storyline dialogue or costuming was kept from scene to scene. So in this case we did not score this category because we feel that what we encountered on the trail was more of a universal theme than a structured storyline.

Shireman is a family-friendly attraction, but they still managed to startle our review group a few times! So high-five for that. Good hiding spots were the culprit of these startles, which made it harder to predict exactly where all of the characters were going to come from. As mentioned above, we were told that their primary crew was not present during our visit and, as an assumed result, most of the actors seemed to be relatively new to scaring. The vast majority of fright tactics used were limited to what we all ‘pop scares’ (where the actor jumps out for the scare and then quickly resets) and, we must admit, it was a bit odd to witness zombies reset while we were still in there scene. However, there were a few scares that stuck out to us as being most memorable during our trek; those included close calls with multiple horses, a distraction by Leatherface and the ‘Y’ in the trail. When we had to make a decision on which way to go, we did end up choosing the correct way, although something decided to chase us down anyway! The finale of the attraction consisted of a message from a skeleton and another encounter with the lady riding a horse who randomly released fireballs from atop her horse.

General admission is $12.00 per person and child-friendly shows (from 5:00 pm to 6:30 pm) are only $5.00 per person. We (obviously) attended the regular show during our visit; but, as a whole, it seemed to be very family-friendly to us, so use your own discretion if you’re debating whether or not to bring children. From the time we departed the queue area until we boarded the haywagon, it took our group about 32 minutes to tour the treacherous trees, which brings their minutes of entertainment per dollar spent (MPD) to 2.67′ well above the average of 1.5 that we calculated from all of the haunts that we visited in 2015! As noted throughout this review, Shireman’s normal cast were not present during our review visit, so we cannot accurately attest to the intensity of a regular show. However, based on our experience, if you’re in the Columbus area and looking for a fun, Halloween trail that the whole family is likely to enjoy, then we we can tell you that The Haunting at Shireman Homestead is probably a great place to make that happen!