The London Dungeon is a Haunted Attraction located in Lambeth, London. 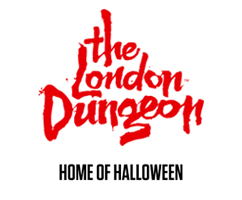 Set in a string of busy attractions on the Thames, the London Dungeon is a collection of London’s most macabre and unsettling moments in history, re-enacted multiple times a day for curious patrons. Winding through hundreds of years of history, the Dungeon presents a collection of unique special effects, well-scripted scenes, and two heart-pounding rides. Entertaining and educational for both locals and tourists the Dungeon is full of dark humor and history. With a variety of events including group admissions for students, adults-only shows, and the Halloween special Death Express, this is an attraction with many offerings. Full of surprises, wit, and horror the London Dungeon has something for everyone in your group.

The cast at the London Dungeon stay on point and in character from your entry into the admissions area to your exit through the bar. Actors portray characters that span the gamut from named historical figures to amalgamations of people taking over one role. Most dialogue is scripted but interactions with guests happened frequently and felt natural and witty. All of the actors in the Sweeney Todd section were particularly chilling and passionate as they caused our group to flinch and jump while telling their story. The interactions between Guy Fawkes and Sir Thomas Knyvett were delightful and dark, and the trial was a free-flowing, impressive bit of improvisation.

London Dungeon has period appropriate costuming and makeup from start to finish. Characters are all fitting to their scenes, and theme and costumes are complete from head to toe. Because the Dungeon focuses on historical scenes, many of the outfits focus on the period more than the dialogue and won’t be seen anywhere outside of the Dungeon’s setting.

Minus a few places where it was possible to lean against a prop or door that would rattle or jar, the London Dungeon is very safe with clearly marked emergency exits and wide and smooth pathways. Staff were helpful and friendly, easily identified by their costumes and uniforms, and concessions and photo ops were plentiful and unique. Upon entering I found out that my bank had not made a note of my international travel and the staff were very understanding and flexible for me to figure out what payment form was still working for me and to give me options.

The London Dungeon is one of several Merlin tourist attractions available on the Thames in either single or bundle admissions. The building that houses it is regal and historical, standing tall beside the river and bustling with activity. While the outside doesn’t necessarily scream haunted house it is easy to spot with signs and two looming coffins marking the entrance. The outside does not necessarily prepare you for what you’re about to face, but it does put you in the mood for exploring London which the Dungeon offers you in spades.

Special effects at the London Dungeon are varied and unique, each underlining the scene they are in without overshadowing the story or the actors. Many of the effects were unique to the London Dungeon and caught me by surprise, especially in the operating theater where I was expecting one effect and was shocked by something brand new. Sounds were often combined with larger special effects to help create scenes or instill horror. The combination was particularly effective on the doomed Tyrant Boat Trip we took, and I felt genuine fear as we approached the end. Also impressive was the Sweeney Todd scene, and I found myself falling behind the group a bit to study the set up and figure out exactly what had just been done. If you’re a fan of practical effects the London Dungeon has a variety of offerings to impress and delight you.

For fans of the macabre, true crime, and dark history, the theme of the London Dungeon is right on target. From start to finish the attraction is dedicated to a clear thematic purpose as it tells the story of London’s dark history. Unfortunately the attraction itself is not allowed to be placed in the actual dungeons, but the location is lovingly recreated in sets and props. Also, the Dungeon is placed on the Thames to keep with the authenticity of the theme and many of the stories contained within the halls. From Jack the Ripper to the bloody days of Henry the Eighth, every scene feeds the ultimate purpose of the Dungeon and fits within the narrative structure of the attraction. The London Dungeon’s story is unique among haunted attractions and true to the setting and area. Nowhere else would this haunt be so effective or genuine.

When it comes to scares the London Dungeon is more focused on story-telling and dark humor than it is on screams. That being said, several of the members of my group found themselves shrieking in surprise and horror at a number of special effects assisted jump scares. The boat ride was also particularly effective at instilling fear as it used a combination of practical and sound effects to build tension and fear. The Death Express made a very large impression as it employed all of the incredible effects available in the Dungeon, the on point acting, and one very notable surprise to cause several of my group members to flee and shriek in terror. The Drop Dead ride was out of order when I visited, but several return visitors told me that it is a terrifying and well worth returning to try.

With about 110 minutes of entertainment for roughly $25 USD entry fee the London Dungeon is a great value. Tickets are only ��21 on the website if you pre-order them, and combo packages are available both online and on site to combine entry to the London Dungeon and any of the other Merlin attractions close by. Discounts are available for groups and school parties and ‘Dungeon Lates’ are only ��29 and offer a scarier, adult-only show. Upon entry I was given a token for a free drink in the Pub/Gift Shop at the end of the attraction, and there are a lot of souvenirs available. If you find yourself traveling through London, especially in October, the London Dungeon is a great way to spend your time and money. It offers a bevy of humor, wit, some scares, and a lesson on London’s macabre history.

Most Realistic Costume (Given by: Team Jefferson Starship)