The Thirteenth Hour is a Haunted Attraction located in Indianapolis, IN.

The Thirteenth Hour is a brand-new haunted attraction to the Indianapolis area for the 2017 season. Offering two outdoor portions covering 10,000 square feet, the owner of this unique haunt has been conjuring up what’s inside for the past four years!

For the first time in 100 years, the forsaken Cathedral of Souls has opened it’s doors for those who are brave enough to enter. But beware’ ‘The Master’ awaits your arrival and is eagerly waiting to strip your ‘burdensome’ souls from your bodies!

Rather than aiming for an in-your-face, gory, high-energy show, this haunt delivers an ominous setting for some creepy and very unsettling scares. Combined with some authentic-looking costumes and a few well-versed actors, your time at The Thirteenth Hour may very well feel like it’s going to be your last!

On a typical night there are about 25 beings trapped within the walls of The Thirteenth Hour. This was only their second weekend open, but most of the crew seemed to be very familiar with their roles. On top of that, we were impressed to find out that most of the actors hadn’t worked for a haunt before.

A good chunk of the actors did not have speaking roles, but those who did helped keep the story and suspense flowing through the haunt quite well. With sinister voices and surprised, yet intent stares, we were threatened to be whipped with a belt (by a nun) if we didn’t confess, informed of how long it had been since living flesh had been found inside the walls (by Heinrich) and guided along the path that led to The Master’ and, you know, our impending doom. The only exception was one character towards the end who said some things that just seemed a bit abrupt and out of place. The Master used a rather effective voice changer to make him sound much more demonic (but you don’t know that) and the ghoul in the introduction scene lip synced to the narrative audio quite effectively (ignore that part too).

About half of the characters wore nearly identical attire, which consisted of authentic-looking cloaks, full-faced skull masks and matching, skeletal hands. These were scattered along the length of the haunt and, combined with an equal number of similarly-dressed statues, we could hardly tell which ones were real and which ones weren’t! With the exceptions of The Master and one of his minions in the strobe room, the rest were also wearing authentic, vintage clothing that identified them as priests, nuns, or other souls that are trapped within the cathedral or catacombs. For those not wearing masks, makeup was mainly greyed-out skin, darkened eyes, hollowed-out facial features and fine details to give them a ‘been dead for a while’ look.

Be on the lookout once your GPS tells you you’re getting close. There are two small signs on either side of the road directing traffic into a small entrance through a wooden fence. We initially had some apprehensions when we pulled in, but a ‘Thirteenth Hour’ banner and the lit-up facade for the cathedral confirmed we were at the right place.

Parking is free, gravel, dimly-lit and marked off with orange traffic cones. The layout was a bit confusing when we first pulled in, but alas, we eventually managed to make sense of it all and got parked easily enough.

The ticket booth was found just beyond a custom-made ‘Thirteenth Hour’ gateway and friendly staff members were available to answer our questions and direct us to the haunt’s entrance. If you don’t buy your tickets ahead of time online, then be mindful that this is a cash-only attraction. An ATM is on site if you forget to bring some ahead of time.

The inside of the haunt is put together well, with minimal safety hazards and a flat, gravel walking path. The queue lines are roped off clearly and some signage is in place to help guide you along the way, when necessary.

Upon arrival, we could see haunt signs, fog, and multiple gateways that clued us in that there was a haunt taking place here.

The high point of Thirteenth Hour’s atmosphere is – by far – the facade to the haunt’s entrance. Resembling a crumbling, centuries-old cathedral with an arched doorway, stained-glass windows, concrete appearance and colored lights, its presence casts a foreboding vibe over the queue area. Coupled with the facade are the sounds of a distant church bell and a pulsating heartbeat.

The only downside is, it’s located between two larger, brick buildings belonging to the traffic control company that it shares the property with. Unfortunately, they effectively dwarf the facade in size and, along with the parking lot being lined with orange cones and flashing traffic signs, it’s easy to get distracted from the cathedral’s awe-inspiring grandeur.

Most of the special effects have been custom-built and -designed by the owner of the haunt. With that in mind, you won’t see many of the props and animatronics that can be found at other attractions.

The front of the church was very well detailed and the inside was even more impressive! Flickering, stained-glass windows, a rickety roof and high-quality sound effects surrounded us, along with other ‘shocking’ elements of nature.

The rest of the inside is actually pretty ‘clean,’ meaning there isn’t a lot of clutter or meaningless decor scattered around. We were actually quite surprised at how well everything makes you think you’re walking through the once-used hallways of an old cathedral’ especially with the consideration that it’s an outdoor attraction. Many dim candles and strategically-aimed lights are placed throughout, which provided some nice, finishing touches to the concrete-looking walls and dungeon-esque catacombs. The hidden passageways and actor hiding spots are built into the scenery too, which made for a few ‘pleasant’ surprises along the way. Some of the other things you’ll see include a few lively corpses, a laser tunnel, fog, strobes, skeletal remains and evidence of souls that are – literally – trapped inside the walls. The sound effects all matched the scenes they were heard in and seemed to escalate as we neared the end of each attraction. At one time, we could even feel the loud pulsations as if it were our own hearts beating!

With most outdoor haunts that try to create an ‘indoor’ environment, a common challenge is not having a ceiling to keep you ‘closed in’ with the rest of the scenery. This haunt overcomes that pretty well with the use of authentic-looking, arched passageways that help keep your eyes down and focused on the path ahead of you, rather than up in the air and thinking, ‘Hey, there’s the sky!’ The fact that they’re a natural fit with the cathedral’s theme and other scenery makes it a stroke of pure genius for this attraction. Other than that, the gravel path is the only other noticeable cue that you’re not inside of a building.

We appreciate when a haunt expounds their theme to patrons before they enter. The first scene of the haunt explains the story and sets the pace for the rest of the tour, explaining the horrific history that exists beneath the surface of the church. The story behind The Thirteenth Hour goes a little something like this:

An undertaker named Heinrich Chapel made headlines in 1903 for his profound idea of building a mass, underground grave beneath the surface of Indianapolis. Heinrich claimed he could remove the soul from a lifeless body. In 1913, 12 people entered the unholy sanctuary, never to be seen again… along with Heinrich himself. It is said that there is a hidden access point from within the Cathedral to the underground Catacombs from within Heinrich’s private office. It is also said that, before Heinrich disappeared, he had spoke of searching for a way to create eternal life. Within the Catacombs, The Master awaits.

The layout of the attraction followed the theme very well and we did find the secret passage leading to the catacombs. Many of the characters kept referring to their ‘Master,’ which led us to wonder who – or what – this being was. Needless to say, we found it… and it wasn’t on good terms.

We must say this attraction took more of a unique approach at scaring their guests than the typical attractions that we visit. There were no chainsaws, no blood and guts, no clowns or many other common phobias. Instead, the biggest fear here arises when you delve yourself into the theme and pay attention to what’s actually going on.

As we were cautiously making our way through the church, we often wondered what was real and what wasn’t. At times, various things in our environment sprung to life, including the walls! They also warned us of ‘The Master’ most of the way through, so we were on the lookout for him around nearly every corner. At one point, we were forced to choose a sacrifice in our group and, upon doing so, it rearranged the order of our group. If you don’t like to be up front or wander off alone – in the darkness, we might add – you’ll probably be in for a treat! The combination of fog and lighting in some areas made it extremely hard for our group to predict what was ahead which made us easy targets for those who were just beyond the veil of darkness.

The finale of the haunt – aka, our eternal damnation – was surprisingly powerful in and of itself, although lacking just a bit of suspense buildup just beforehand. A unique usage of some very common effects left us not wanting to go any further! We don’t want to give it away, but just make sure you follow the light!

There are multiple ticket options available at Thirteenth Hour. Our team visited the attraction on a Friday night when general admission tickets are $15.00. If you go on a Saturday night, their tickets are priced higher at $20.00, so be aware of this. Here is a breakdown of their ticket prices:

As mentioned above, on-site ticketing is ‘cash only’ this season. If you do purchase your tickets online, there is a $2 service fee added to the pricing.

Ironically, it took our group 13 minutes to wander the deathly halls of The Thirteenth Hour (including the time we walked between attractions). With their Friday admission pricing, that puts their MPD (minutes of entertainment received per dollar spent) to 0.87. This is a fair bit below the average of 1.5 that our team sees most often, but this is also a very unique attraction that we believe will please those who enjoy more of spooky, traditional haunted house. Considering this value, we also recommend visiting on the dates where the ticket prices are lower, when possible.

Group rates and season pass information can be found on their website. We also noticed on their website that it states a portion of each ticket is donated to local charity that can be determined by guests.

When considering visiting the Thirteenth Hour, ask yourselves, will you become one of The Master’s consumed souls that feed his followers so they can live for all of eternity? 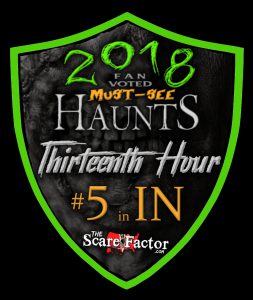 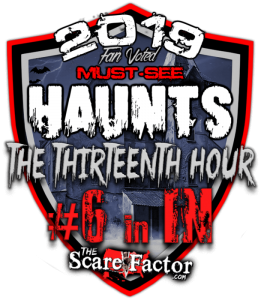 Best Dialogue (Given by: Team Zombillies)

Most Believable Haunt (Given by: Team Zombillies)

Best Finale (Given by: Team Zombillies)

Most Immersive Haunt (Given by: Team Zombillies)