Escape room Pittsburgh was easy to find using Google maps and GPS. However, when you arrive at the building there is a small sidewalk sign, and a sign on the corner that could possibly be missed. When you book online they inform you to park at the Aldis across the street which is convenient that you do not have to park on the street and it’s free.

Once you enter the lobby, you can feel that the building has some history. The lobby is spacious, the front desk has tablets for you to sign waivers on. There were steps to enter the lobby; there was no wheelchair accessible entry from the front. However, on their website, they are ADA accessible. The lobby was very clean as well as the restrooms. The lobby had chairs, a couch and café tables with stools.

We were met almost immediately upon entry with a very enthusiastic team member. Since we were early he directed us to have a seat or embark in some mini puzzles that they had available to help get our brains warmed up.

The owner (Joe) was on location and answered all of our questions, as well as provided some behind the scenes access that was very interesting. Our game master (Josh) did a great job. He was informative, enthusiastic and very helpful.

The Tomb Explorer room is an ancient Egyptian Tomb theme. Before entering the room, Josh provided us a video explaining the theme, the history and the story of the room. I would suggest paying attention. After the video, we were brought out of the viewing area and provided the rules. We were also provided a walkie talkie. This walkie talkie was used to receive clues and to ask for hints. If we were stuck on a puzzle for too long, we would receive a clue to help solve the puzzle. This was a unique way of relaying information, which kept the feel of being trapped in a tomb with little contact to the outside world.

Once we entered the tomb, the stone wall slammed shut behind us and we had one hour to escape. The environment was well done. We definitely felt like we stepped out of Pittsburgh into an old Egyptian tomb. Dim lighting, old artifacts, hieroglyphics and other ancient wonders are consistent throughout. Subtle music filled the air as well as additional sounds. Sound effects were consistent with the puzzles being solved, which added more realism to the room. Lighting effects added to the rooms, providing atmosphere and also used in puzzles and clues in an effective way.

I think what really stood out in Tomb Explorer was the story. The video provides a backstory. Clues you find will also add to the story, so you need to pay attention and share what you have found with your team. The more puzzles you complete, the more secrets you uncover, leading to a fantastic unexpected ending that I was geeked out about.

The puzzles were interesting and all kept with the theme of Ancient Egypt. They were set up in a linear fashion, so when you completed puzzle A, you continued to B and then to C. Although there were additional things that could be done for other puzzles, they still needed to be completed in a certain order to advance.

All the puzzles were very interactive, some requiring multiple teammates coordinating together. Some puzzles completely stumped us while others were slightly easier. All the puzzles were logical, but attention to detail and communication is needed to succeed. According to our game master Josh, we were stuck on the easier puzzles and did great on the more difficult puzzles. We were actually making things more difficult than they were. Which can happen when you are under pressure (we start to overthink things). As previously stated, if we were stumped, the game master could contact us on the walkie talkie and provide hints. The hints remained cryptic, so they did not just provide the answer. The hints were provided sporadically to help keep the flow of the game moving.

Tracking time was different in this experience. There are no clocks or countdown timers in ancient Egyptian tombs, so we used the walkie talkie for time checks. This provided a way to focus on the puzzles without the distraction of the ticking clock. However, it was hard to tell if you were wasting too much time on a certain puzzle. As you progress, you will reveal your time but you have to uncover it first, which was something I have not experienced before.

Even though we were on the last puzzle as time expired, we were highly entertained by Tomb Explorer’s 2nd gen theatrically designed, story driven escape room.

The cost is $27 a person, up to 8 people, which is pretty average for escape rooms in the area.

At a success rate of 35%, it is definitely a challenge and a great use of one hour. 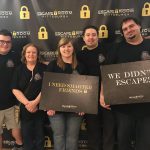