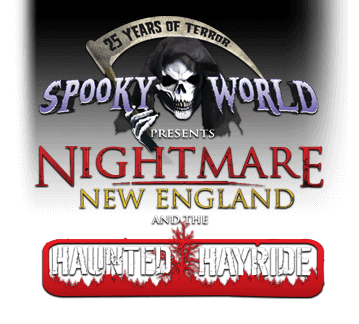 Spooky World presents Nightmare New England and the Haunted Hayride is New England’s Largest Haunted Attraction on more than 80 acres. Horror Fanatics from New Hampshire, Massachusetts, New England and across the country travel to visit us every year for thrills, chills, screams, and fun! Get a full night of fear for one low ticket price! 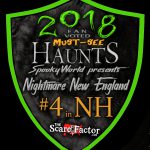 John – 1/10 – October 2, 2021I had high expectations in visiting Spooky World from past visits to Berlin and Foxboro. The place …show more was huge so the time entrance was nice. There wasn’t a lot of immersive Halloween/horror atmosphere outside of a handful of characters more interested in scaring the occasional child than interacting with the crowd of adults.

The hayride started out promising, but my hopes were quickly dashed in the first scene. The sets were very visually stunning, but with only one actor it felt dead, and not in a good way. Spooky World boasts a mile hayride, but the majority was dead space without enough actors. I think there were 10 sets in total, but none of them had any connection to the other. One of them was an amazing village that reminded me of the ewok village in Return of the Jedi. Again, one actor who was wearing shorts t-shirt and barely any makeup. The worst part of the trail? There was a carnival/clown area with actually two actors. One of the clown girls walked behind the trailer and said, ‘I’m supposed to say something scary but I don’t know what to say.’

The next haunt was the Colony, a walk through the woods with broken down buildings. The haunted walk started off well with a foggy swamp building using lasers and fog. Sadly, the building was empty and there was no scares. There were some really nice scenes but again the actors were lacking or the actors just stood by the trail staring at me. The last 100 yards of the walk was in total darkness, with empty space until the very end. At the end was a guy using a chainsaw, no scare, just standing there revving the engine.

The next haunt was their new ‘Asylum 47.’ Apparently this is supposed to be an insane asylum set on New Year’s eve in 1947. The haunt was too clean and too bright. There were a lot mannequins, but the bright lights hurt their effectiveness. There was one stand out actor in the house, talking with her self and asking weird questions to customers. There was really nothing in this house which identified the time period, if anything, just the opposite. There was a small portable TV from the 60s. Attention to detail was lacking. The other positive? There were a decent amount of actors, they just needed more training.

The last house was the ‘3D Dreamscape.’ I am not sure what this house was supposed to be, a clown house? The 3D part of this was really good, but most of the rooms were empty or didn’t make sense. One room was a pond and another a corn field, not sure what this was supposed to be/do. There was one room filled with static clowns but no actors. That was a complete missed opportunity.

The house ended and dumped us into a vendor area with food, fried dough, and a huge full bar. If Spooky World put as much effort into their haunts as their bar this would be an amazing attraction. Sadly, this is a washed up version of a haunted attraction well past its prime. Save your money! 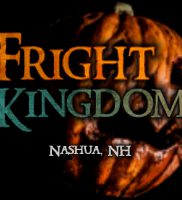