2021 Guide to Haunted Houses in Indiana 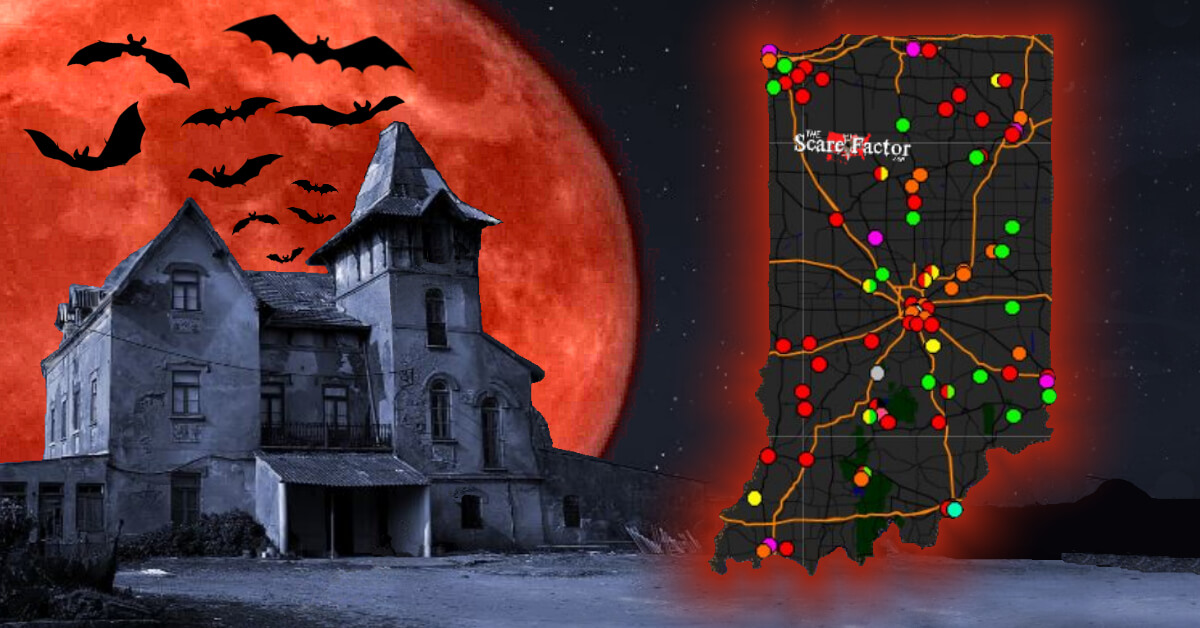 Did you know that Indiana has 85 haunted house attractions listed for the 2021 Halloween haunt season!? Some of them may be located closer to you than you think…

Below, we’ll break down what types of haunts you can choose from, ranging from spooky hayrides and terrifying trail walks to creepy home haunts and multi-attraction scream parks. We’ll also discuss where in Indiana some of the most popular haunted houses are located!

The following list totals up each type of haunt in Indiana, based on how they are listed on our website:

The city with the most attractions / surrounding haunts is Indianapolis, IN.

Each year, we search the internet to find out what these haunts are up to during the off-season. During our 2021 update session for Indiana, 17 haunts’ information was updated, 5 were removed (for various reasons) and 2 haunts were added to the Indiana Haunted House Directory.

Here are the Top 5 Haunts in Indiana* according to our local Scream Team’s experiences.

*Based on all of our Indiana Haunt Reviews and their most recent, respective scores given out of the past 3 years.

The following are some of the most popular haunted attractions** in Indiana, based on our website traffic: 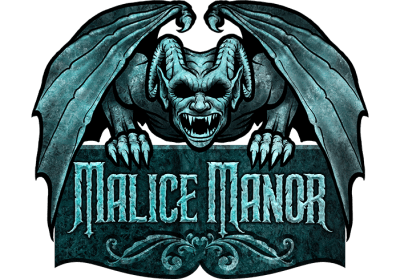 From some of the twisted minds that brought you The Haunted Hotel KY comes a brand-new haunted attraction...

Malice Manor Haunted Attraction is located in Clarksville, Indiana, and is opening its door again this fall! With over 10,000+ sq ft. of indoor horror, the weather is never a problem at the Manor. Malice Manor is depicted as a dreamland of thrills and spine-tingling screams around every corner. An all original escape from reality. Are you brave enough to endure the creatures that have escaped the mind of the Manor's owner? He lurks in the halls waiting for you! Step inside Indiana's Newest Nightmare!!

We began in 2011 with a simple haunted house, and as of now, we have expanded to be Miami County's best entertainment thrill destination! With thrills and chills for kids and adults alike, Streapers has something to offer for everyone! So come check out what we have to offer, and let's make a memory! You're adventure starts here.

For many years, Streaper's Entertainment has been the leading hands-on haunted house attraction in Miami County, offering visitors of all ages thrills and chills during the Halloween season. With over 20 live actors, over 14,000 square feet of twists and turns, and terrifying special effects, our Haunted Adventure is sure to send chills down your spine. So come see what the screams are all about!

Streaper's also has Escape Rooms throughout the year! 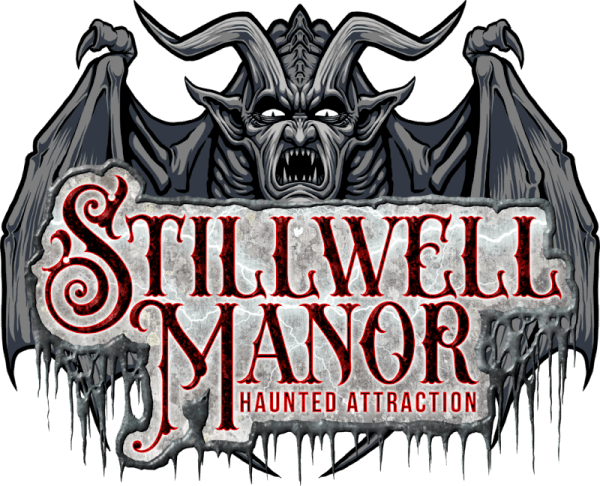 Stillwell Manor is an old-school haunt with three differently-themed attractions under one roof for one low price!

Upon General Stillwell’s return from the ravages of war, he found that ghosts of his past have taken over his home and are haunting the remaining staff and family. Journey through the mansion and grounds lost in time for over 140 years and face the wrath of the tortured souls that are trapped in time.

If you survive the journey through the Manor, you will venture into “Tantibus” and see your “Nightmares” up close and personal. Who said nightmares only happen while you sleep? You can only pray that you’re dreaming and wake up, someday.

Stillwell's newest attraction, "Forsaken" offers an optional touch upgrade through the remnants of Isabelle's freak show and down into the tunnels where "The Doctor" resides... Are you brave enough to discover the horrors that lie in wait for you?

Journey through over 30,000 sq ft of fears and frights. If you dare!

** Warning – we are not responsible for any ghosts that tag along back to your home but please tell them to come back to the manor when they are done with you. We always lose a couple every year. 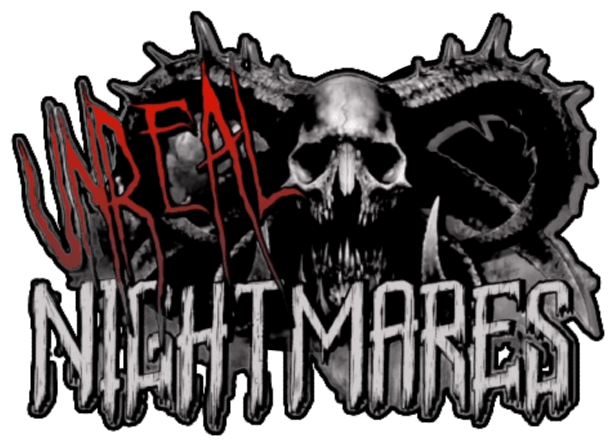 Will you make it out of these Haunts alive or will you be left behind to rot until next year?

We had record numbers showing up this past season and if you enjoyed watching your friends cry we suggest you come back this year!

Portal to Hell
Ye, though you walk thru the valley of the shadow of death, you WILL fear evil! Will you be able to escape our Portal to Hell?

Mania
The places in the city of Southport, where city officials don’t want you to see… Explore the inner demons of Southport, the bumps in the night that no one talks as you explore Mania!

Deranged Deception
Grind your way past the creepy killers that infest Manor House including Chuckles revenge. Trust your instincts and run for your life! 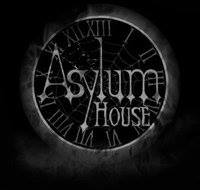 In the depths of the Asylum House are endless mazes of catacombs and tunnels unfit for anything human. When you enter just remember, the dark is their place, the night is their time. The Asylum House has been scaring people for over 20 years and is considered by many as the premiere Indianapolis haunted house attraction. What started out as a vision has turned into something beyond the grave. You can expect the best in terror entertainment. Originally located at German Park in Greenwood, the Asylum House has occupied the historic Hannah House and the Marion County Fairgrounds. We now have a permanent home at the old Southland Skate Center in Greenwood. Come visit us and experience why we are the best haunted house in the state!

The Haunted Hayride is a crown achievement at Hanna Haunted Acres. You will discover that it is more than just a hayride through the woods. It is a well paced roller coaster cruising through the dour woods with all possible nightmarish creatures imaginable lurking about. Forced to keep at the pace of the tractor pulling your wagon, you will have no choice but to endure the malicious beasts as they step into the light for your terror. Some will follow you, others will try to take you back to the woods with them, but rest assured, all of them will make sure you scream like a child.

There was said to be an old man who lived in the famous Acres Manor on top of the hill. Legend had it that he kept all of his children in the Manor basement. Sometimes he would send food down… sometimes he would forget. It was not until the old man made the mistake of venturing down into the basement one night, forgetful of its inhabitants. The police say his body was never found, and after knowing how much those… children, were fed down there, we understand why. But the manor is now their turf. Their new basement of darkness, and they’ll welcome you with open arms. And open mouths with lots of sharp incisors

Step into the red colored barn house and discover the real animalistic doings that go on inside. A grisly sight to behold, you will be gasping for air due to the foul stench of the leftover bodies and will be… clamoring to escape as you discover that the slaughterhouse boss is still lurking about. So get out or become next on the menu. You could be fed to the hogs, or hung from the ceiling. Either way, you better run out of this barn house. Because you are the only cattle the boss will see.

Venture into Freakshow. A humiliated make-up artist at the carnival was fed up with people criticizing his work. He decided to turn the whole carnival upside down. He got his hands on some very awful chemicals. Not deadly, but morbid nonetheless. He locked everyone in and released the toxins into the atmosphere, turning everyone into wide-eyed laughing psychopaths. Their teeth and smiles grotesquely enlarged, their eyes bloodshot red and yellow, and their bodies amazingly slender and disgusting now. The former carnies now roam the abandoned carnival grounds. And we have opened it back up for you to see. Can you hear the maniacal laughter in the distance? It is closer than you think.

EVIL IN THE WOODS

Something is lurking in the corn. While walking alongside Mr. Leather’s cornfield to get to the market, you hear a blood-curdling scream, followed by a chainsaw ripping through flesh. You know… that the police would be more than an hour out, so you decide to venture into the thick stalks of corn, following the horrifying shrieks. But you are not alone, and Mr. Leather is hungry for flesh.

Hanna is proud to open Descension, a haunt so pitch black, it’ll make your skin crawl just to walk through. Navigate through the underground tunnel, now free to venture into, and realize that you are not alone down there, and that there are no bodies left over. Whoever was left down there, is now a what instead of a who. Use your senses to guide your way through, but you never know how close something might be in front of you. Even with your eyes open.

Rockford Riot:
Within Rockford Correctional Facility's reinforced walls lives some of the most demented inmates in the country. With no chance of release, these prisoners are the perfect target for human experimentation, exploitation, and cruelty at the hands of the guards. When enough is finally enough, the prisoners riot and seize control of the prison. It's their world now, and they make the rules. Depravity meets depravity here, and they'd love to meet you too.

Ramses' Wrath:
Upon his death, the body and soul of Ramses II, the greatest of Egypt's pharaohs, was sealed away to rest forevermore. But when archeologists hungry for fame, glory, and gold unearth the pharaoh's final resting place, they awaken his wrath. The curses carved into the stone and uttered lifetimes ago have come to life, and none who enter his sacred tomb shall be spared.

Leveau's Curse:
New Orleans has always been known for its lively atmosphere, but everything is not always as it seems. It's been said that here, the dead don't ever truly die, and the residents whisper of disappearances, human sacrifice, and strange screams that come from the swamp at night. Dark secrets and ancient magic lie in wait behind every corner. Leave an offering for the spirits, beg for their protection, and enter their world at your own risk.

Ancient Evil:
The bones of kings and paupers, sinners and saints alike line the hallowed halls of this ancient catacomb, and within dwells a dark cult of death, decay, and corruption. Exiles roam these chambers, mindless and feral from the cult's constant torment. What evil stirs the bones within this crypt, and to what atrocity do these cultists pray? The answers lie within the darkest depths of the tomb.

Check their ticketing page for updated prices for each of Fear Fair's special events.

**This information was determined by looking at the haunts’ traffic on our site from the past two years. This is not a top haunts list. The above haunts are listed here in no particular order.

We’re looking for reviewers in many States to help us provide coverage across the country. If you don’t currently work for a haunt, please visit our Join Us page.

Want to Get Our Latest Reviews Sent to Your Inbox This Haunt Season?

Click Here to learn more about our “Haunt Advisor” newsletter.

Did You Know There’s a Scare Factor Podcast?

Well, now you do! :) Click Here to browse our episode library.
We’re also available on most major podcast distributors.

Come See Us on the Socials!